LIFE WITH AN ALOOF RABBIT

To celebrate the publication of The House Rabbit Handbook, a party was given for all the (human) contributors. When rabbit-people get together the conversation naturally turns toward our long-eared pals. Their health, foibles, sleeping habits, and whisker-twitches were discussed in unsparing detail.

One woman told me how her rabbit loves to lie on his back between her two children while they watch TV. Another described his bunny’s morning routine of dancing round his feet while he makes coffee, then hopping on his lap and nibbling the bottom of the newspaper. By the time a very nice young man was halfway through a story about having his faced licked by his lovable lop, I had to excuse myself for a reality check.

When I arrived home from the party, Trixie and Oscar greeted me with their usual enthusiasm. Trix allowed me to pet her muzzle for a few minutes before hopping off to more important business. Oscar showed his delight by not running away when I said hello.

I spent a long time wondering where I’d gone wrong. Not enough handling? Too much handling? Bad “breeding”? Maybe I just wasn’t good with rabbits. Maybe they needed some little boys to watch television with.

The answers came as I began fostering. I learned and am still learning about the wide range of lagomorph temperaments. At first I was surprised by how few actually conformed to the stereotypical cute-n-cuddly or passive/timid ideals held by many humans (encouraged by children’s stories, the media, pet stores, etc.). Having fostered several litters I have also seen that many basic personality traits are present at birth. Handling, socialisation, and early environment play a major role, but bunnies are not blank slates. They arrive here with capacities and tendencies which must be recognised and respected.

The following suggestions may help to strengthen the bond between you and your independent friend, but the first and most important step is to accept her for herself.

Humans who love too much

Being coddled and cuddled by humans is not at the top of every rabbit’s wish-list. Aloof rabbits remind me of childhood experiences with overly affectionate adults. Did you have an aunt or grandfather who just loved to pinch your cheeks and announce loudly to the world what a little cutie you were? How did that make you feel?

Your rabbit may not be aloof at all, but simply overwhelmed by the magnitude or volume of your affection for her. Rabbits are so irresistibly soft, adorable, and gorgeous that it is difficult to avoid smothering them with physical affection. A good substitute for kisses, hugs and petting is verbal affection. Talk to her. Tell her what kind of a day you had, and how glad you are that she is there to help you recover from it. This form of animal-assisted therapy is simple, effective, and only minimally exploitative of your friend.

If you tone down your demonstrativeness, you will be able to receive what your quiet friend has to offer. Your low-key bunny’s messages may be getting lost. As with a shy rabbit, a useful exercise is to sit on the floor in the same room with your rabbit. That’s the whole exercise. Just sit there. Read a book or stare out the window while Flopsy grooms herself or stares out the window with you.

This exercise is one that rabbits do with each other all the time. Certainly they share physical contact, but not necessarily 24 hours a day. Rabbits are with each other even when they’re not actively doing things together.

Although he may not ask for attention from you, your rabbit may crave the company of a rabbit friend. I don’t recommend adopting a second rabbit if your only reason for doing so is to solve a problem with your present companion; but an outgoing rabbit can bring out the extrovert in an aloof rabbit.

If your goal is to become closer to your first rabbit, you should be aware that adding to the family sometimes has the opposite effect. Some rabbits are aloof toward humans but very affectionate to other rabbits. You may find that your new bunny has stolen Flopsy’s heart. With all her emotional needs met by the new rabbit, Flopsy is more aloof than ever toward you. I eventually came to accept that Oscar was Trixie’s rabbit, not mine. Fortunately Trixie allows me to shower affection on her, so everyone is happy.

Ask not what your rabbit can do for you

Because our companion animals are totally dependent on us for their physical needs, it’s easy to fall in to a “benevolent dictator” relationship with them. Why isn’t Flopsy more grateful for the fact that you rescued her from the shelter, that you spend your hard-earned salary on toys and treats and vet bills?

This view overlooks the many demands we make of the animals. Love me forever, unquestioningly, no matter what kind of mood I’m in. Be affectionate towards me whenever I want you to be, no matter what mood you’re in. Leave me alone when I don’t feel like being bothered. Cheer me up when I’ve had a rotten day.

The list is long, and most animals manage to meet many of these difficult demands much of the time. Take the time to appreciate the reciprocity of your relationship and to enjoy your rabbit for exactly who he is; in his own inimitable way, he will do the same for you. 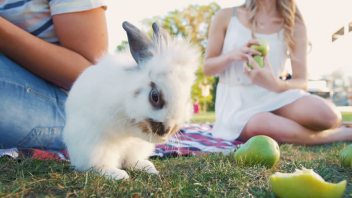