We were delighted to receive an update from foster bunny Teddy’s new caregiver.

Teddy loves everyone and everything. When he came across the cats for the first time he rushed up to each of them in turn and put his head under their chins. Geoffrey, Cuddles, Ron, Esme and Billy jumped back not knowing quite what to make of this strange ground-hugging, bouncing creature but Ishka patiently allowed him to nuzzle up to her and in turn sniffed his head. From then on big, fearsome Geoffrey ran a mile whenever he saw Ted, and the others, with the exception of Ishka, kept their distance for a month or so, gradually getting used to his ways. Cats interpret rushing up as a sign that they’re about to be attacked so they took a little while to accept that he meant no harm. In the winter time however, all the cats plus Teddy snuggled up together around the heater, forgetting their differences, basking and rolling in the heat.

The most important thing is that none of the cats are interested in showing any aggression to Teddy. My only slight concern, however, is with Jessica in her hamster rollabout ball as she rolls up to him and attempts to pull his fur through the slots to pouch and line her den with later! He doesn’t seem worried but I have to keep an eye out for her as she is very persistent.

Over time, cheeky and mischievous Ronnie has started being affectionate with Teddy, licking his head, much to the delight of Teddy but I can tell he’s after something from me (food of course) as he keeps stopping and looking up at me to make sure I’m noticing how kind he’s being! Billy too has learned that it makes me happy if he licks Teddy’s head… I think when it comes to unconditional love, rabbits are the champions.

But there are exceptions… Ishka, a very special old lady grew very fond of him and him of her, and when she died in March this year Teddy kept checking her furry igloo to see when she might be coming back. Concerned that Teddy would be lonely while I was at work and while he is convalescing from a back condition, two small friends have moved in to keep him company. When I first put them together, these two little boys purred and scuttled up to him, nuzzling under his belly. Even though they are only a fifth of his size, he puts his great soft head under their chins to greet them. So dear, gentle Teddy has become a part-time surrogate mummy to two small guinea pigs. 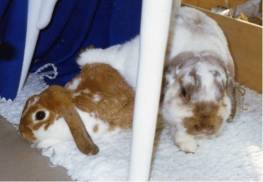